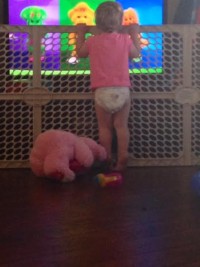 To say life has gotten a little overwhelming would be a huge understatement.  This time last year, we had a small play mat on the floor with a few small toys in a small bin beside it.  Our television did not have a fence around it.  We didn’t own a baby gate.  We had decorative vases, photo frames, books, candles on the coffee table and end tables.  The remote controls were left out in plain sight.  So were the phones.  We didn’t even really know what “babyproofing” involved and figured we would just teach our little one not to touch.  That made much more sense than moving anything breakable out of reach.  (Hahahahaha Wow! Were we ever naiive to actually believe such crap?)

Now, we have a fence across the entrance to our living room with a hinged gate that is kept closed at all times.  We have another baby gate at the other entrance to keep babies contained in a safe area.  There is nothing on the coffee table and end tables that have remained.  (Some furniture has deemed itself unsafe and has since been removed from the room!)  Well nothing on the tables except spilled milk, board books and whatever toy has been plopped down there on the run.

When our daughter started crawling, we started using the living room as a play area.  We would pull the ottoman over from in front of the arm chair to block her from getting into the dining room and ending up under the dining room table or near the china cabinet.   It was an easy fix since at the end of the day, we could tidy up her small toys, move the ottoman back and reclaim our living room as our own.  As she got bigger, her toys got bigger and her need for space grew too.  We moved our dining room table from the centre of the dining room to against the wall to give her more room to toddle around pushing her walking toys.  She was able to roam free and access the sliding glass patio doors that she loves to smack her hands against and occasionally lick.  (Gross, I know!)  This worked for a while.

She started walking and owning much bigger toys shortly after her baby brother was born which meant that our living room was filling up with toddler toys at the same time as we took the playpen, playmat, exersaucer, Jolly Jumper, bouncer seat, Bumbo seat, etc. out of storage and set them up again in her space.  It wasn’t working.  There wasn’t enough room for all of us to “live” in our living room.  Not without major congestion and claustrophobia setting in.

After watching Miss 17 month old climb up the chairs and onto the dining room table in the blink of an eye, we raised the white flag and surrendered.  We made the decision to make our dining room a play area.  It was a difficult decision but one that we embraced and haven’t regretted.  We moved our china cabinet and dining room table into the kitchen, freeing up a bunch of space for the Little Tykes car, ride-on lady bug and dinosaur, bean bag chair, tiny table and chairs, and lots, lots more.  It just made sense.  We added toy storage and it got even better.

That being said, it is still a little overwhelming to relax and unwind in a baby sanctuary.  Having a playroom and living room in one space was presenting itself to be quite the challenge.  Picture yourself pouring yourself a cold drink after a hard day and trying to relax in the middle of a daycare centre or kindergarten classroom.  It’s not overly relaxing.  It makes you eyeball all the million things that need to be done.  The toys that still need to be picked up, the ride-on toys that aren’t lined up, the books that need to be repiled, etc.  When Hubby came home one day and opened the front door to see our living room coffee table standing on its side on the other side of the gate,  we decided to claim the downstairs family room as our own.  (After asking Little Miss 17 months to get off the coffee table,, not to climb on the coffee table, not to stand n the coffee table and seeing her finally fall off of the coffee table as I helplessly breastfed our son out of reach just 3 feet away, I had moved the coffee table out of the room in a hurry to prevent future accidents.)  The downstairs family room would be ours and only ours!  Since our downstairs space has a fireplace and bar, it was already a safety hazard for babies so we have never brought the babies down there.  And, since the babies don’t go down there, we don’t either.  We were excited to have a place to call our own!  It would be our own little safety hazard.  No kids or kid stuff allowed!

Do you know what this means?  It means no stuffed animals and baby blankets all over the couches!  It means leaving a drink on the coffee table and leaving the room without panicking about what liquid/broken glass mayhem might happen while you’re gone.  It means entering and exiting the room without climbing over gates.  It means walking across the room and not stepping on a block.  Do you know how much it hurts to unexpectedly step on a block in the dark?  It means furniture that doesn’t constantly get soaked in spilled milk…or worse!  It means watching a movie and not suddenly being interrupted by some musical toy hidden in the bottom of the toy box that has spontaneously decided to start singing.  (One night I woke up to something singing “Three little kittens, they lost their mittens and they began to cry!”  It was scary and disturbing and wouldn’t stop.  I followed the sound down the stairs, into the living room and had to dig to the bottom of the toy box to identify the culprit and look for the on/off switch to end the madness!)  No diapers.  No baby gadgets.  No unexpected “Squeak!” from accidentally sitting on Sophie le Giraffe.  No searching up high for the last place you quickly moved the remote control to get it out of the reach of little hands.  A place to call our own.  Siiigh…

We’re still trying to come up with a name for our “new” oasis.  We’ve tossed around “Adult Area” and “Parent Den.”  It’s proven to be a great place to unwind and since we are very rarely awake and without kids in tow, so on the rare occasion that we do make our way down there, it’s like a vacation in our own home.  It is so much like a vacation that the first night we made plans to hang out down there, Hubby went out and bought all the ingredients needed to make mojitos to christen the new parent headquarters.  We unfortunately fell asleep before actually making the mojitos and I just threw out the moldy, rotten limes a couple of days ago but that’s besides the point.  We’ll get there.  Some day.  A place to call our own.  No baby stuff allowed.  We are so committed to having an adult-only area that we just might be rebels and not even put safety plugs in all of the outlets!

Here’s hoping that we’ll find a night soon where the babies go to bed reasonably painlessly and we can actually go downstairs and enjoy our new space before we are ready to go to bed ourselves.  Cheers!

andbabymakes3imean4 is one mom’s adventures with 2 babies, 11 months apart.  If you liked this post, click “Follow” to be the first to know of future posts.  Thanks for reading! xo